A little bit of freedom goes a long way.

It’s not every day that a doorman is launched to a level of popularity equal to - or even surpassing - that of the CEO. Not every company embraces the idea of a front-line employee becoming a natural internal brand representative, let alone fostering an environment that allows for that type of intense personality slingshotting in the first place. At Virgin hotels, however, that’s exactly what happened with the launch of the Virgin’s new employee engagement web application.

Given this platform on which members of each and every level of the organization were weighted equally, executives were free to mingle with front-desk employees, housekeepers could leap into free-flowing conversations with kitchen staff, and anyone could give a colleague a Valentine in recognition of a job well done. Employees who would typically never interact suddenly became united in the social-media-meets-employee-engagement digital ecosystem. In this shared experience, higher-ups became less monolithic and front-line employees became less like distant assets, and all subsets of Virgin Hotels were able to converge as natural friends working towards a common goal in a united culture.

Virgin Hotel’s approach wasn’t entirely about lovey-dovey employee equalization, though – the concept had teeth. The newfound ecosystem of flattened communication solidified employees and managers as people first-and-foremost, rather than faceless positions, and people are far more approachable with far more meritorious opinions than the corporate overlords of the past.

So what really happened here? What were the side-effects of Virgin’s landscape of Horizontal Accountability, where the personnel playing field was equal?

Near-complete employee adoption of the app

Employees were encouraged – not forced – to adopt the Virgins Hotels web app, and did so en masse. Encouragement and a reminder that use of the app was perfectly acceptable during work hours led employees to embrace their newfound technology rather than to view it as a hinderance.

Use of “Bare It!” for authentic feedback

To attract quality, employers need to create an ecosystem of camaraderie. That means an equation of teammate = teammate, where the teammate variable can represent individuals from all levels of a company - executive to middle management to front-line - to foster real, authentic feedback.

Employee disengagement is the proverbial kiss of death for the modern company. Finding creative ways to involve and communicate with workers on all levels is going to continue to play a larger and larger role as the Millennial workforce grows. Virgin founder Richard Branson hit the employee engagement nail on the head when he said, “For us our employees matter most, it just seems like common sense to me that if you start off with a happy and motivated workforce you are much more likely to have happy customers, which will improve profits and keep shareholders happy.”

Improve the in-store experience for consumers and employees by delivering actionable data to managers. 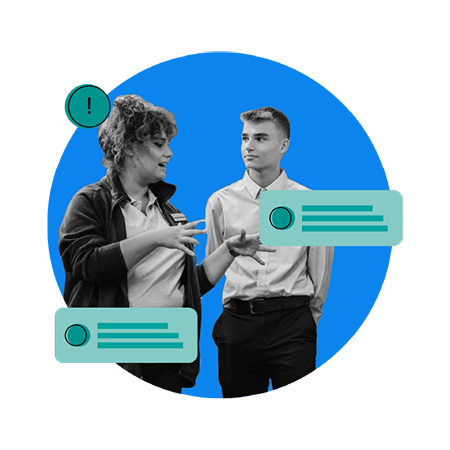 WRITTEN BY
RevUnit
RevUnit is a technology studio that helps supply chain clients identify and implement data solutions that actually prove ROI. We help organizations across industries like transportation, freight, logistics, retail, and manufacturing achieve business results through innovative data solutions — powered by AI/ML and the cloud. We’ve done it for clients like ArcBest, J.B. Hunt, and Walmart.

Where Did All the Workers Go? Mitigating the 2022 Labor and Supply Chain Crisis
Tips for Leading High-Performing Remote Teams
A Remote Worker’s Guide to Working Better
It’s Time to Revisit Remote Workforces
Thank you! Your submission has been received!
Oops! Something went wrong while submitting the form.