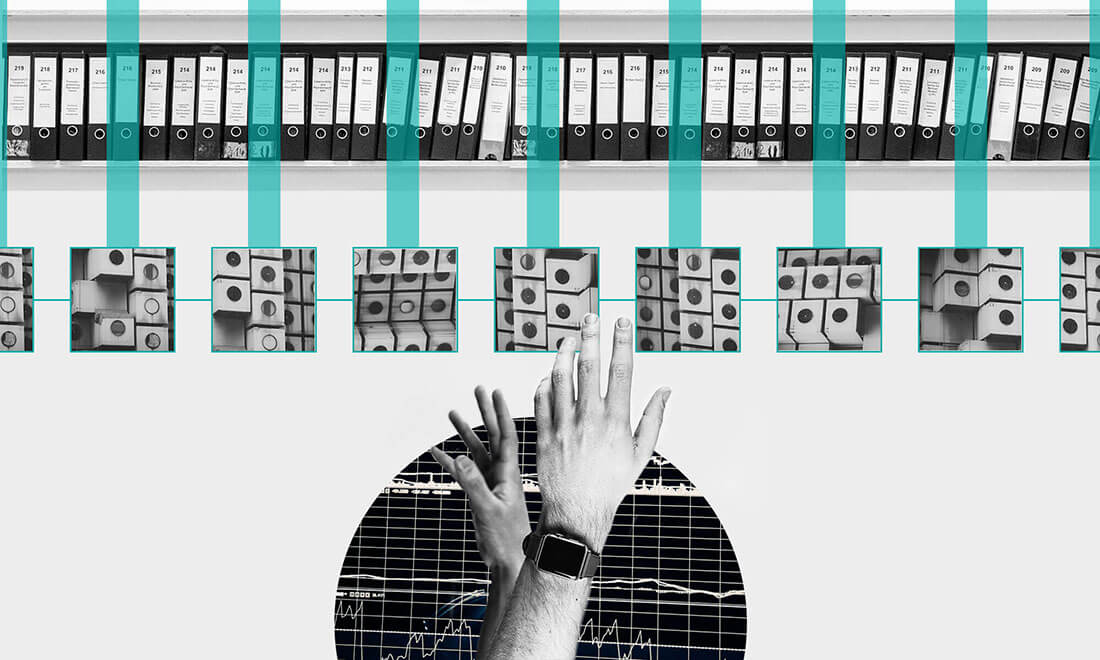 Interest in blockchain technology has been growing steadily over the last few years and has quickly spiked in the last 6-9 months. This is no doubt due to higher interest in cryptocurrencies, for which blockchains serve as the technological foundation. It’s important to make a distinction between blockchain tech and cryptocurrency however, given that blockchain patterns have many more use cases than just backing currencies.

Theoretically, any problem that could benefit from using a distributed and trustless ledger is a potential application for a blockchain. Let’s start with a high-level overview of what makes up a blockchain.

At its most simple, a blockchain is a distributed ledger, or record, of transactions. This is different than a transaction ledger that a bank would use for example, because the bank is the only party that controls and has access to that ledger. A blockchain ledger is different as it is built to allow multiple parties to participate and send transactions to a shared ledger. All transactions are verified by a quorum of other parties that participate, which means that you don’t have to trust any single entity involved in the ledger. You’ll hear this aspect of blockchain described as “trustless”...meaning that the system doesn’t require a single trusted third party.

At its core, blockchain is not a novel technology. It is built upon building blocks that have been around for decades in some cases, and these foundations are already widely adopted in their individual manifestations. For example, cryptography, immutable databases, distributed systems, and consensus networks are all mainstream technology. It’s only when they are combined in a specific manner to create a blockchain that we begin to approach novelty.

Because blockchains are built on established foundations, the actual technical implementation of a blockchain in your organization or industry is not a difficult lift. Many companies have already surfaced that specialize in offering turnkey blockchain solutions. For example, IBM offers a fully hosted blockchain suite of tools and software and Amazon just recently released theirAWS Blockchain Templates.

To give you a better idea of things that a blockchain mght enable for your industry, we’ll briefly describe an example application.

This example is a fictional traceability application that we’ll call HighViz. This application is developed and maintained by a consortium of organizations that all operate within the same vertical market of food manufacturing. HighViz was created with several goals in mind that revolve around transparency and traceability.

From a consumer perspective, HighViz enables transparency all the way down the supply chain for the ingredients in the food products they buy every day. It will provide immediate and trustworthy access to information about ingredient origins and environmental practices from all companies involved. And because this application is built using blockchain technology, they can trust the data at their fingertips to be well verified by all parties involved in the manufacturing and shipping processes. This functionality is enabled by the distributed nature of a blockchain. Multiple parties can submit data to the ledger while allowing everyone to have confidence in the validity of the data. This data is also immutable (or unable to be changed) so other parties, or the direct consumer in this case, have confidence that the data they are looking at has not been modified by others.

From a corporate perspective, HighViz will allow for all organizations connected to the application to have a high level of visibility into every transaction that preceded a product being purchased by a consumer. This transparency goes beyond the partner companies and extends to regulatory bodies as well. Some examples of the information that is transparently shared across companies could be information like temperature records for refrigerated shipments or certifications of compliance with organic production practices. You can quickly begin to see the value of having this information available to multiple parties without having to question the integrity of the data.

What do we think about blockchain?

As technologists, we’re always hesitant to get too caught up in the inflated expectations of technology hype cycles. Rather we seek to understand what is actually new and has the potential for significant impact. In this case, the combination of technologies making up blockchain is really interesting, but not as novel as the hype indicates. However, we already see blockchain acting as a catalyst that is forcing organizations and consumers to think and talk about transparency and data sharing. Those conversations and agreements have the potential to drive significant disruption in many industries.

"We already see blockchain acting as a catalyst that is forcing organizations and consumers to think and talk about transparency and data sharing."

What are we doing about it?

So, given our belief in blockchain as a catalyst for conversations around transparency, what are we doing about it at RevUnit? For a while now, we’ve been monitoring the technology and working on prototypes to ensure a deep understanding of blockchain and its implications. Most importantly though, we are active members in a number of initiatives to define standards, identify meaningful use cases, and bring academia and industry together to move this technology forward. You’ll hear more about those initiatives from us in the next couple of weeks.

How can you participate?

As we stated above, we believe that agreement on standards and protocols will be critical as multiple parties begin to figure out how to work together. We would highly encourage participation in the number of groups that are trying to move these standards forward. Not sure what groups make sense for your company? Let us know, and we can make some recommendations.

‍
Next, if you’re actively looking for ways to test out the technology, shoot us a note. We’re looking for partners that want to explore use cases together, and we’d love to help you figure out if blockchain is the right way to solve your particular challenge.

WRITTEN BY
Spruce Feinstein
Spruce is a software architect at RevUnit. He has worked in a number of fields, ranging from transportation and logistics to aviation. Spruce is also passionate about DevOps, and spends time working with the latest and greatest developer tools and infrastructure.

Resources for Women Aspiring to Become Developers
Artificial Intelligence: Perception Versus Reality
The Fourth Industrial Revolution and the Future of Work
Emerging Technology and Facing the Fears of Automation
Thank you! Your submission has been received!
Oops! Something went wrong while submitting the form.